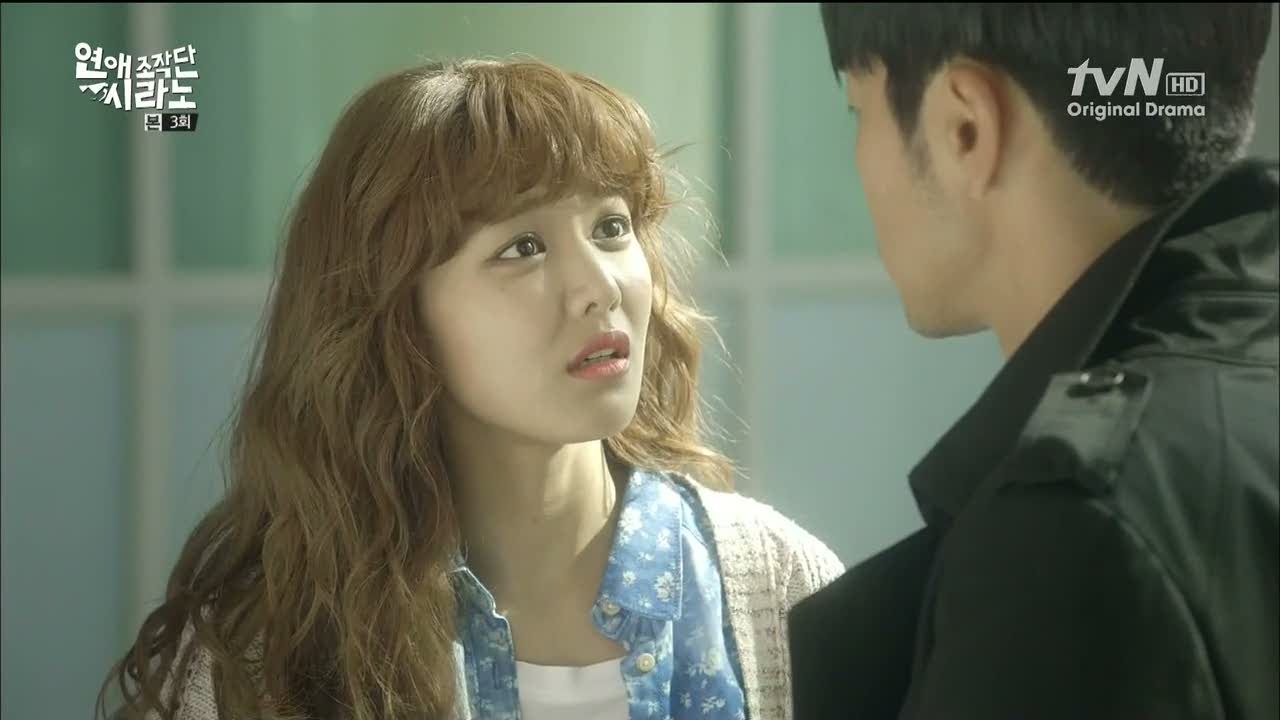 Then she asks about Yi-seol oh so casually , and hears that she was going to marry the other theater head, Do-il. Then Moo-jin informs them that the boss must have seen the video footage, which means he knows about the kiss. Arang hangs his head. Byung-hoon joins them and first offers Arang a Cyrano business card and an employee discount, HA to have them work on the case for him.

Hm, was this a test? She calls him a coward, shrinking back after saying it. We see Moo-jin sitting outside with the fan, creating the romantic breeze. He sees through the denial and says that he saw everything. But he still likes her. And so we begin. She suggests they count the score even, since she did kick him, and they smile.

But then Byung-hoon feeds him his lines over the comm: She looks like she wants to kiss him, or maybe hug the emotionally stunted man for growing some feelings, and gives him a big proud thump on the shoulder: Meanwhile, Ho-yeol waits with bated breath near the alley where they had previously hidden from his fangirls. His only instruction is to let the target make her choice.

He finally speaks, telling Se-kyung that he likes her for real:. I could never like you as much as he does. Just as your feelings have changed, what if his do? She arrives at the alley, but finds it empty. Aw, he kept it all this while? Se-kyung runs on, searching the neighborhood for sign of Ho-yeol.

Moo-jin rides up to find Arang sitting alone nursing his broken heart, and gives him a shoulder to lean on. There he is again, sitting with a lonely cup of ramyun, head hanging. She raps on the glass, then sticks that band-aid on the glass. It lights up his face in the most heartwarming way. The girl might have just left. Byung-hoon just replies that the guy was going to make things happen, but had to suffer a bit for it.

He sinks into melancholy thoughts, and looking at that Sherlock Holmes charm triggers a flashback of when he first received it. Min-young drops him off at a storefront, and he bursts inside where Yi-seol is at work with her marionettes. She smiles to see it. There are poignant beats scattered throughout, which I appreciate. The outcome is important, but his comment about the kid needing a little bit of suffering along the way speaks to the process having merit as well. I also like how the Client of the Week allows the show to offer a variety of perspectives about love, which is also shown in the very different personalities running Cyrano Agency.

These kind of story-of-the-week shows have a certain procedural element to them, which can be both a positive and a negative trait. On one hand, it keeps stories short and sweet, enough to satisfy with a small dose without needing to get bogged down in too many details.

On the other hand, these clients are in and out, so when procedurals are clumsily handled they can feel like emotional drive-bys. The best procedurals use the episodic thread to shed light on its main players, which is a great framework to get our two leads arguing about their diametrically opposing views on romance.

I do like the tiny snippets we get to see of him, and the flashes of ominous glares. He turns on a dime with unnerving ease, one second being friendly and helpful to Min-young, then next clenching his jaw and shooting daggers at Byung-hoon. Are you a mobster? Are you legally dead? Are you interested in Min-young or just amused by her, or using her? Are you friend or foe? The pacing of the show is brisk enough that we keep from sticking to one particular character or emotional beat for too long, which I consider an asset.

I want him cheeky and full of bravado, not moping. I was extremely wary of this character from promos and descriptions, because she seemed way too naive on paper and very been-there-done-that as far as dramaland heroines went. How many more overly romantic chronic dreamers do we have to see butting heads with cynical heroes, right?

And that means growth on both sides. Your email address will not be published.

I'm enjoying this as well and don't understand the wide-spread criticism it's receiving from viewers here, but oh well. To each his own, ne? My only quibble with this episode was the example of the dinner being cooked: In my view, that meal was being made for a customer. It wouldnt have existed if not for that customer, and it belongs to the customer, NOT the cook. I have to admit I didn't get the dinner example. I also think if the dish was made for the customer it should go to him as well. I didn't get the dinner analogy as well. My problem with the scenario is that the customer doesn't know this is the best version of the dish that can be made.

He doesn't know what's he losing out if the cook just eats the dish and gives him a worse-tasting one. The dinner example all depends on what the COOK's purpose of being a cook is. If the cook is cooking for his own happiness, then if eating his own dish will make him happy, go for it. If the cook is a cook for the sake of his customers, or money, or the happiness of his customers, then of course the food would go to the other person.

It makes sense guys. This is the cool thing about reading recaps and comments. I just let some things go over my head without thinking much about them I can now see how it carries a bit of weight. I busted out laughing when she totally shot down that k-drama cliche.


You think i can u-turn like they do i k-dramas?! Seung Pyo says he would eat the dish himself i. Realistically speaking, it is not possible for the chef to eat the dish and just cook another less-appetizing dish for the customer because there is only one Se Kyung. Dramas often introduce analogies such as this, using situations, and objects as symbols necklaces, potatoes , band-aids etc to give the story deeper significance.

I temporarily forgot to check and see if something new was posted. I am counting on you to answer some of my questions again: I just love reading from you. Also, I left you a response to your comments actually two, one under my post, and the other under yours. Make sure you read them, please: See, one should never lose hope, I could be beat at being 1st , on this site: I hope your day is going well.

What time is it for you? I will start working around 6am, so I have got lots to do before then. Thanks for the recap! Mastar creeps me out. I don't have high expectations with Sooyoung, but she's doing a great job. I've been googling for hours. I don't like the creating a spectacle to make love happen She was watching Arang for a long while. Then Ho-yeol confesses, runs down the street with her from some silly fans It just doesn't make sense to me. Nor do I think that that's a relationship that has any basis and that can thus last.

So did Arang really like Se-kyung, or was that part of the plan too? In any case, you shouldn't kiss the girl unless you mean it, especially when you know she likes you.

And what's with Min-young cheering for Arang's love and then Ho-yeol sticking a plaster on a window pane is all that takes her to go "Oh, so cute" and cheer for him instead? Cutely-romantic gestures aren't love. They are meaningless unless there is a solid basis somewhere — but here there isn't. Never mind that no plaster would stick after such a long time.

Not doing it for me. I'm a bit like you.

I'll still watch but by pure curiosity, not because I care for those characters. Arang did like Sekyung. When he first confessed to her, he meant it. But then his conscience kicked in and he pretended that he only kissed her to protect Ray. At the same time, before Arang's confession, Sekyung already to develop feelings for Ray, thats why she chased him to the hall, when she found out he is supposedly leaving school.